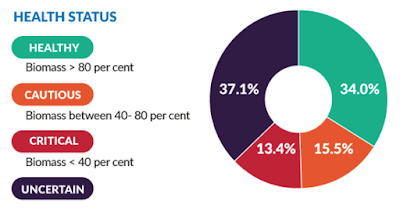 Below is an executive summary:

Oceana Canada’s first annual Fishery Audit in 2017 revealed that our fish stocks are not delivering nearly as much as they could, for oceans or for people.

In 2017, only one-third of our stocks were considered healthy. Of the 26 critically depleted populations, only three had rebuilding plans in place. Big gaps remained in the data required to manage stocks effectively.

One year later, some progress has been made. Fisheries and Oceans Canada (DFO) has made significant investments in federal fisheries science, and the department continues to increase transparency by releasing its annual Sustainability Survey for Fisheries and departmental work plans.

However, much more work needs to be done if our seafood industry is going to reach its potential.

Recent investments in federal fisheries science capacity has not yet yielded measurable change in the reported metrics. DFO is falling behind on implementing work plans developed in response to the Auditor General’s 2016 report. For example, four of five rebuilding plans promised by March 2018 remain incomplete. Key policy instruments have not been fully implemented or remain in draft form, including the proposed Fishery Monitoring Policy. Meanwhile, scientific and management information produced by DFO is often published late or not at all.

On the water, there have been few changes in stock health. This is to be expected: it takes time for investments in science and policy to be reflected in measurable changes in the abundance of fish populations. However, the slow pace of policy implementation means the long-term decline in Canada’s fish stocks has not yet been halted, let alone reversed.

Oceana Canada has recommended specific actions — detailed here — to address issues raised in this Audit. These include completing work plans and rebuilding plans, filling data gaps and finalizing a national catch-monitoring policy.
Posted by JustAquaponics.ca at 15:05